/ Gathering Stones aka Biblical Archaeology: The Garden of Gethsemane

The Garden of Gethsemane 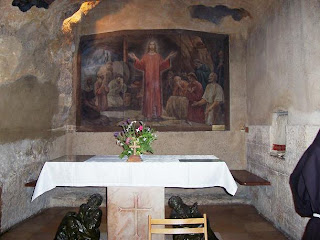 The time of the Passover was a time when all the Jews came to Jerusalem for the event. The city would be housed to a maximum capacity and every “nook and cranny” would be utilized for quarters. The Cave of Gethsemane was one such case. Normally the cave would be used for processing olive oil, but at this time of the year, the cave would be unused and available for quarters. The people of Jerusalem opened their homes to their kinsmen by providing them with shelter. The kinsmen would arrive with the paschal lamb and upon leaving would leave the animal skin as a token of appreciation for their kindness.

John 18:1
1 When Jesus had spoken these words, he went forth with his disciples over the brook Cedron, where was a garden, into the which he entered, and his disciples.


Tourists flock to the Garden of Gethsemane to venerate the site of Jesus' arrest without understanding that it is the TRADITIONAL site and not one that is proven by archaeological or historical evidences. Instead, the earliest archaeological and historical evidences point to the cave which is known as the Grotto of the Apostles, a place which is almost hidden by the TRADITIONAL site of the Tomb of the Virgin which was built next to the cave in the fifth century.

The Gospel of John is the only text to use the word "garden.” In the Greek text, the word is kepos which can be translated as a garden, but in reality, it is more accurately translated as “a cultivated tract of land.” (Taylor: 1995)

Archaeological excavations have identified that the cave was used as an area for pressing olives. The time of the Passover Feast in Jerusalem is a time when nights are chilly and the dew settles heavily on the ground. The night that Jesus was arrested was such a night as identified from the text of the Gospel of John citing in verse 18—“for it was cold...” It is only reasonable to understand that the cave where the olives were pressed would be more comfortable than the open air under the olive trees. The translation for Gethsemane is “press of oils” so one may consider that the groves of olive trees on the terraced landside and the cave for the manufacture of olive oil to be one and the same called Gethsemane.

I am a born again, fundamentalist Christian. My objective is to present the biblical accounts in an historical background including archaeological and historical evidences.